In its 24 years of existence, the biannual Transat Jacques Vabre has managed to establish itself as the toughest and longest-running two-handed transat. The race is equally revered by the sailors and an enthralled public, reaffirming its relevance and the investment of its partners with each edition. The original concept is simple: the source of this great race is an historical route: the coffee route. It is an eventwith an expert mix of tastes, vintages, aromas and characters.

The new flying foilers; ten days of festivities, sailing baptisms, eco-installations  and the #NoPlasticChallenge around the Bassin Paul Vatine; a lost bet in the west; Hugo Boss cutting their keel. Charal in the Doldrums. A Le Havre local boy living his dream. Ari’s threadbare mainsail. The glorious arrivals in Salvador de Bahia’s Bay of All Saints. The spatulated bow of the winning scow.

The 14th edition of the Transat Jacques Vabre Normandie Le Havre will live long in the memory. The world’s longest and toughest two-handed transatlantic race is the always the first and best showcase of the latest technology and projects in short-handed offshore sailing. And because this biennial race is double-handed it allows teams to push their polars.

The action started before the start, with several boats suffering breakages in final training and even delivery to Le Havre. A favourite in the IMOCA60 class, Arkea – Paprec (Sébastien Simon / Vincent Riou), one of the five latest generation flying foilers, broke the port foil as they approached Le Havre.

More drama was to follow as a fire during the night of October 21 on the IMOCA Fortil forced them to abandon before the start. 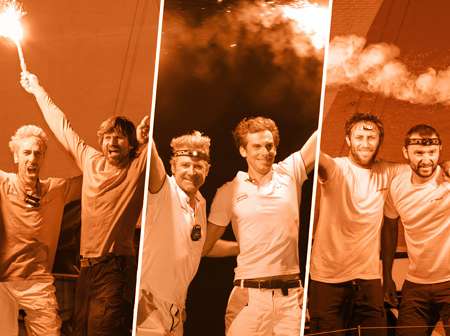 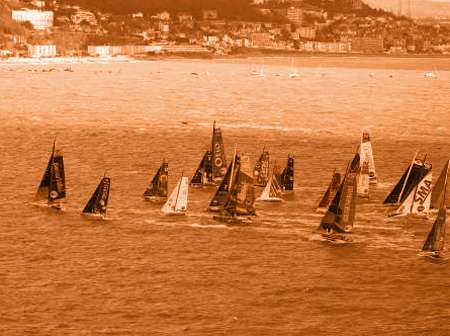 The weather conditions were hard, even brutal, for the majority of the fleet.

In the Class40, the identity of the victor was uncertain until the finish line.YannickBestaven and Pierre Brasseurwere in the lead at the entrance to the Doldrums, but were caught up by their pursuers. It took all of the duo’s battling instincts to keep barely two hours ahead of Maxime Sorel and Samuel Manuard at the finish.

In the Multi50, Erwan Le Roux and Giancarlo Pedoteled them intoItajaí, the skipper notching up his third victory with the same boat in the Transat Jacques Vabre.

The IMOCA saw the arrival of foils. Armel Le Cléac'h and ErwanTabarly took command in the trade winds, but the Doldrums shuffled the pack. Vincent Riou and Sébastien Col were the first to emerge from the old sailors’ trap and held off their rivals’ comeback all the way to the finish. For Riou it was his second consecutive victory.

In the Ultime class, the race turned into a duel between François Gabart - Pascal Bidégorry and Thomas Coville - Jean-Luc Nélias. The gap between them remained almost the same all the way to the finish inItajaí, in favour of the Gabart-Bidégorry duo.

Gales followed storms in the middle of autumn in the Channel and particularly in the Bay of Biscay. The start was delayed for everyone, and then there was temporary stopover in Roscoff for the Class40. 26 Class40, 6 Multi50, 10 IMOCA and 2 Mod70 were on the start line for a new destination: Itajaí (Brazil).

Though the crossing Channel remained manageable, a new depression produced a storm-tossed sea off Cape Finisterre. The Class40 made a pit-stop in the bay of Morlaix.

The Class40s racked up some incredible average speeds. Sébastien Rogues and Fabien Delahaye won the race, followed by Spaniards Alex Pella and Pablo Santurde and the Franco-German duo of JörgRiechers and Pierre Brasseur respectively.

In the Multi50, the pairing of Le Roux-Élièsestablished a lead, but only actually broke away in the bay of Rio.

In the IMOCA, Vincent Riou with Jean Le Cam won in Brazil, crossing the line four hours ahead of Marc Guillemot and Pascal Bidégorry.

In Mod70, the Josse-Caudrelierduotook just eleven days to arrive in Itajaí, five hours ahead of Gavignet-Foxall. 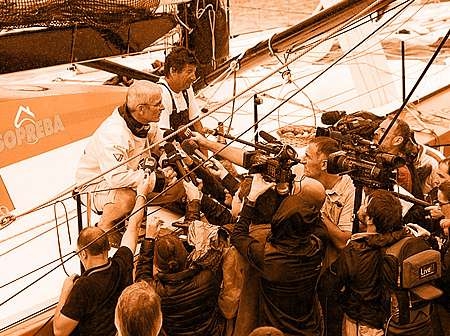 Three successive depressions thinned the ranks of the three classes, with 15 abandonments. The monohulls (Class40 and IMOCA) headed straight to Costa Rica, while the Multi50s were required to round St. Barts and Barbados.

There was a great contest in Class40, YannickBestaven and Eric Drouglazetgot away quickly and just over three weeks after leaving Le Havre, Puerto Limon welcomed them as winners.

In the IMOCA, the boats that took the northern routecame out ahead and Jean-Pierre Dick scored another victory in the Transat Jacques Vabre, this time with JérémieBeyou as a teammate, in just over two weeks.

Brazil made way for Costa Rica, meaning there were no more Doldrums to cross. It was replaced by the Caribbean Sea. Six 50-foot multihulls and fourteen IMOCA monohulls were at the start.

The new course was very attractive and very elitist, especially after a huge depression settled down across the direct route in the middle of the Atlantic! The storm divided the IMOCA fleet into two; those who made it round to the other side without breaking anything lead on to the West Indies,with Marc Guillemot and Charles Caudrelierat the front until Puerto Limon.

In the Multi50,Franck-Yves Escoffier, this time with Erwan Le Roux as a teammate, wonthe battle in the Caribbean Sea. 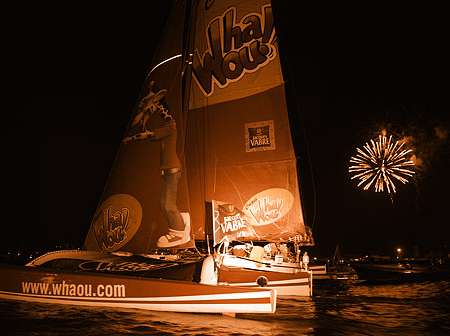 The Transat Jacques Vabre opened up to the new class of 40ft monohulls that brought 30 starters. The IMOCA monohulls arrived in force with 17 crews; 8 50ft multihulls and 5 ORMAmultihulls completed the fleet. That made a record of 60 boats on the start line.

In the Class40, the competition was intense for the Italian duo of Giovanni Soldini-Pietrod'Ali, who sailed a faultless race to finish ahead of Dominic Vittet and Thierry Chabagny.

Franck-Yves Escoffier won again, this time with KarineFauconnier, in the Multi50.

In the IMOCA, Michel Dejoyeaux, partnered by Manu Le Borgne, took line honours in Salvador de Bahia after being chased by Marc Guillemot and Charles Caudrelier, who arrivedjust three-quarters of an hour behind them. It was a fiercely fought race with no fewer than sevensuccessive leaders.

Franck Cammas wrapped up his third victory on the Transat Jacques Vabre, back in the company of StèveRavussin, with a ten-day crossing.

2005 will be remembered as one of the hardest in the history of the Transat JacquesVabre: a large depression swept acrossthe fleet in the middle of the Bay of Biscay. 10 boats abandoned.

In the monohulls, Jean-Pierre Dick with LoïckPeyron wereunflappabledespite the pressure of the Roland Jourdain - Ellen MacArthur duo, who finished only half an hour behind them!

On their new 50ft trimaran, the Escoffier father and son combination rose above it all by completing the course in just over 12 days.

In the 50ft monohulls, Joe Harris and Josh Hall were first across the line. 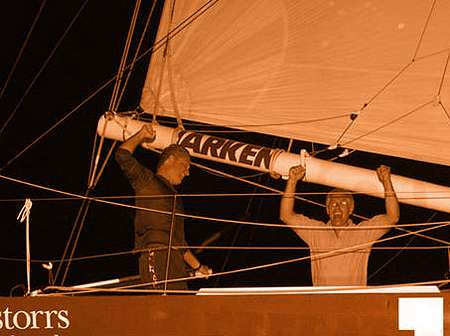 38 boats were moored in the BassinPaul Vatine: 14 ORMA multihulls, 17 IMOCAmonohulls, 5 50-foot monohulls and 2 50-foot multihulls. The departure of the multihulls was delayed: a gale prevented them from launching the day after the cannon fired to send the monohulls on their way. They left four days later and no longer had to round Ascension Island. So, it was direct route for everyone.

In the IMOCA monohulls, the duo of Jean-Pierre Dick-Nicolas Abiven emerged at the head of fleet from the Doldrums and made a successful break, while the race for second place was fiercely disputed byJourdain-Thomson and Golding-Thompson, who were separated at the finish in Salvador de Bahia by just 19 minutes.

As for the ORMAtrimarans, they made their descent in a hurry and Franck Cammas, partnering with Franck Proffitthis time, did the double by winning with more than an hour margin on Jean-Luc Nélias and LoïckPeyron.

Colombia gave way to Brazil, Salvador de Bahia replaced Cartagena. And so, it became necessary to cross the Doldrums to arrive “chilled out” in the Southern Hemisphere. The 12 IMOCAmonohulls and 7 50-ftmonohullstook a direct route, while the 14 ORMAmultihullswere required to deal withthe Ascension Island.

The ORMAtrimarans benefited from favourable weather conditions; the duo of Franck Cammas - StèveRavussinblew the speedometer to arrive in the Brazilian port three and a half hours ahead of Alain Gautier and Ellen MacArthur.

In the IMOCAmonohulls, the duos did not have a course mark to round and they quickly descended towards Brazil. Roland Jourdain and Gaël Le Cléac'h were crowned victors in Salvador with five hours margin over Mike Golding and Marcus Hutchinson.

In the 50-foot monohulls, the British duo of Alex Bennet and Paul Larsen were the winners. 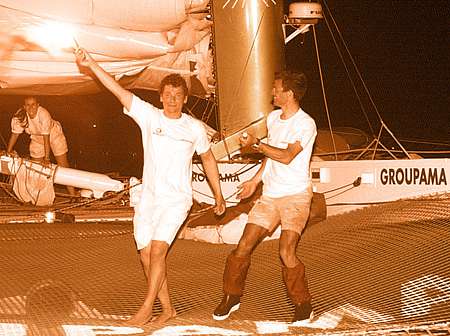 This Transat Jacques Vabresaw a delaysstart for the 20 boats: 8 ORMA multihulls, 10 IMOCAmonohulls and 2 50-foot monohulls. The monohulls had to sail nearly 4,500 miles, while the multihulls had to cover more than 5,500 miles. A formidable storm would unfortunatelymeet them and be responsible for the tragic disappearance of Paul Vatine.

In the ORMAmultihulls, LoïckPeyron and Franck Proffit were the first to round the mandatory waypoint at Barbados. The duo would never be caught.

In IMOCAmonohulls, Catherine Chabaud and Luc Bartissolwere leading throughout the race, but were forced to make a technical stopover to recover a spinnaker. Thus, Thomas Coville and Hervé Jan crossed the line first in Cartagena.

In the 50-foot monohulls, the duo of Emma Richards and Miranda Merrontook line honours.

36 sailors answered the call for this third edition. 18 boats were at the start: 6 ORMA multihulls, 8 IMOCA monohulls, 2 50-foot multihulls and 2 50-foot monohulls.

In the ORMAmultihulls, the brothers Bourgnon, Laurent and Yvan, went it alone and finished the race more than a day ahead of the Vatine-Nélias duo. Likewise, Yves Parlier, who was joined by Eric Tabarly, in the IMOCA. They finished well ahead of the Thiercelin-Wavreduo in the overall standings.

On the 50-footers,HervéCléris and Ronan Delacou won in the multihulls; Pete Goss and RaphaëlDinelli, in the monohulls.

1995 was the edition when one became two, as the race went double-handed with eleven starters: 6 monohulls and 5 multihulls, for a crossing of the Atlantic, which connected Le Havre with Cartagena in Colombiafor the second time.

The weather conditions were favourable,as just over two weeks later, Paul Vatine again put his name at top of the list, this time accompanied by Roland Jourdain.

In the monohulls, the Jean Maurel- Fred Dahirelduodominated the fleet, finishing more than a day ahead of Jean-Yves Hasselin - HervéBesson in Colombia. 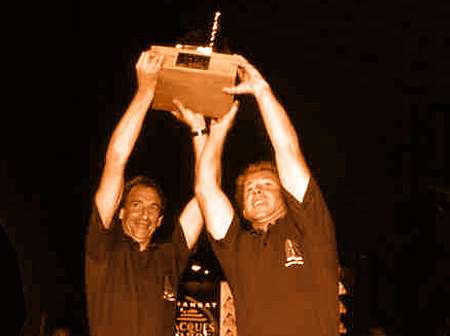 The creation of a great race

Le Havre, the ultimate coffee port, was transformed into the start for the first transat with a coffee flavour: 1993 saw the birth of this new oceanic event for solo skippers racing from Cartagena in Colombia. On October 31, 13 soloists on 8 monohulls and 5 multihulls were on the starting line of this first edition of the coffee route.

In the multihulls, after a difficult start, Paul Vatine and Laurent Bourgnon began an incredible duel in blistering trade winds. Vatine, the Normandy skipper,came out on top after 16 days and 46 minutes, even though hefinished an hour and 17 minutes behind! The explanation lies in the fact that Vatine, the victim of a collision with a support RIB, benefitted from a time bonus of nine hours and ten minutes.

In the monohulls, Yves Parlier negotiated the Azores High pressure system perfectly, handled the high pressure zones coming from the south deftly and left his rivals far behind. He won this first edition of the Transat Jacques Vabre in 18 days 23 hours and 38 minutes. 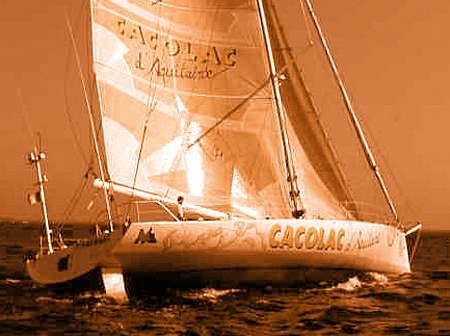