Home > News > The British are coming!

With two British skippers among the four favourites for the Class40 of the Transat Jacques Vabre Normandie Le Havre and the continuing rise of Alex Thomson in the IMOCA 60, French dominance is being threatened like never before.

The 14thedition of the Route du Café may have come a touch too early for the Thomson and his new Hugo Boss, but Luke Berry and Sam Goodchild will start in pole position for the smaller monohull class.

Reflecting the much greater depth of solo sailing talent in France, both Britons have French co-skippers. Berry has Tanguy Le Turquais with him Lamotte – Module Creation and Goodchild has Fabien Delahaye, who won the race in 2013. But their rise is indicative of a generation of young British sailors who have been doing their apprenticeships in French waters. There are eight British skippers and five Germans competing across all the three fleets in an increasingly international field.

On paper, the main rivals to the British in the Class40 will be two all-French crews, Aïna Enfance and Avenir  (Aymeric Chappellier / Pierre Leboucher) and Credit Mutuel(Ian Lipinski / Adrien Hardy).

The Swiss boat, Banque du Léman(Simon Koster / Valentin Gautier) is the newest boat in the fleet, so new (it launched a month ago) that the skippers have only sailed 1,200 miles and neither has previous Class40 experience.

The race within the race if those five boats are close will be between architects and generations. Credit Mutuelis a David Raison design, with the most obvious difference being its big raised nose - aka a big “rocker”.

The other four are Sam Manuard designs, with Banque du Lémanthe only mach IV and the others mach III’s from 2017-18.

In one of the closest finishes in Transat Jacques history, Maxime Sorel and Antoine Carpentier on V and B, claimed victory in the last edition in 2017 Chappellier then with Arthur Le VaillantonAïna Enfance and Avenir arrived second in the Bay of All Saints, just 17 and 42 seconds behind after a match race down the coast of Brazil.. After over 4,500 miles of crossing the Atlantic, Phil Sharp (Britain) and Pablo Santurde (Spain) on Imerys Clean Energy were only 35 miles behind in third on an older generation Manuard mach II design, heartbreakingly dropped after having led out of the Doldrums.

Chappellier was also second in last year Route du Rhum, which means he starts as the overall favourite, but the margins could be even tighter this year.

“I don’t think 16 days is unrealistic,” the 29-year-old Goodchild said. “But I think it will mainly be decided by the weather not by the boat. I don’t think 16 days was unrealistic with Aïna’s boat (in 2017), Leyton is exactly the same boat as Aïna, but we’ve got a few mods, which will hopefully help us. France vs Britain, mods vs rockers, Let the racing begin.

“There are three or four favourites on paper and then probably another three, four or five which are not going to be very far away and if they have a very good race will win and if any of the top boats make a mistake, they’d be in front of them.

“Aïna is obviously up there, they should have won it last time; Credit Mutuelbecause they’ve got two very good sailors and a new boat, if they can keep the thing in one piece…They’ve got a big rocker (rounded raised bow) which doesn’t necessarily make them faster than us, but a lot more of an all-rounder. In the training, what we’ve seen is they go through waves a lot better, so if the sea is big they could have an advantage. Lamotteare up there as well because they know the boat well and they’re two decent sailors. I like to think we’ll be in the mix too.”

The 33-year-old Berry independently concurs. “We want them all to be behind, but who do we want to be close to? Aïna, Leyton, Credit Mutel,” he said. “Plus I still think the Swiss may have an advantage speed wise, so we have to keep that in mind.”

As Goodchild said: “They’re a complete unknown. If Banque du Léman are two knots faster than everyone and they’re sailing badly and they’re only half a knot faster they could still be in front of us.”

The other contenders include Linkt(Riechers / Castle), Crosscall - Chamonix Mont Blanc (Duc / Ducroz) and the mixed crew of Pourre / Luciani on Eärendil, another Manuard mach III. Beijaflore, the 2018 Lombard design, won the Route du Rhum last year (as Veedol) but has a new skipper in William Mathelin-Moreaux, joined by Marc Guillemot and they have been worrying all week whether they can get insurance for the race. 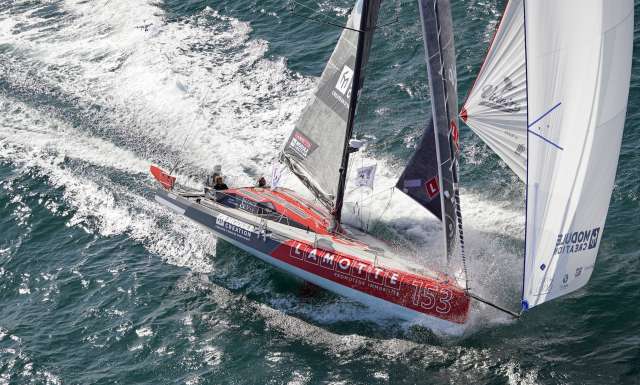 SAINT-MALO - SEPTEMBER 20: French skippers Luke Berry and Tanguy Le Turquais are sailing on the Class 40 Lamotte - Module Creation, prior to the Transat Jacques Vabre, on September 20, 2019. (Photo by Pierrick Contin) 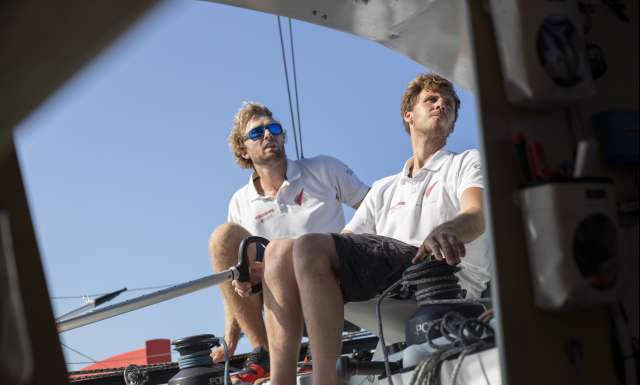