French dominance of the race under threat

West is best? A split at Ushant…

Many of the biggest names in offshore sailing will be among the 59 boats and 118 crew that cross the start line of the 14thedition of the Transat Jacques Vabre Normandie Le Havre tomorrow (Sunday, October 27) at 13:15 (French time) and begin their 4,350-mile race to Salvador de Bahia in Brazil. All will be remembering to set their watches, with the clocks going back an hour overnight!

As usual the first night of the Route du Café will be hectic and the evolution of the forecast last night means that heading west looks best - how far west remains the question and the fleet may split as around Ushant. Depending on the age, size and capabilities of their boats (27 Class40, 3 Multi50 and 29 IMOCA 60), they could all be right.

Among the host of leading French lights like IMOCA favourites, Jérémie Beyou (Charal) along with Armel Le Cléac’h, Vincent Riou and Paul Meilhat, is a much more powerful than usual international contingent, including eight British skippers, five Germans, three Swiss, two Irish, Japanese and Italian and one Belgium, Dutch and American.

Ten IMOCA in the mix

German skipper, Boris Herrmann has already enjoyed a fairly spectacular summer after delivering Greta Thunberg across the Atlantic to the UN Climate Change Summit in August in his IMOCA 60, Malizia II.  Herrmann, 28, finished fourth in the last edition in 2017, and despite a ferociously competitive IMOCA fleet, he is aiming for a top five finish with 25 year-old British co-skipper, Will Harris.

Britain’s leading solo sailor, Alex Thomson is playing down his chances having only just launched his astonishing, radical and seventh IMOCA, Hugo Boss. But he and Neal McDonald, Ocean Race veteran and Hugo Boss’s performance manger, will not be slow. And England’s victory against the All Blacks in the rugby World Cup semi-final will doubtless have given them a little boost. There was more than one screen tuned in, and not a few supressed celebrations, during the last skippers briefing on Saturday morning.

They are one of the five latest generation IMOCA. The always competitive, Samantha Davies will be pushing harder on an older, but heavily upgraded Initiatives-Cœur, which has new enormous foils and Meilhat as co-skipper. And Germany’s Isabelle Joschke forms a powerful pair with Morgan Lagravière on MACSF.

Volvo Ocean Racer and fastest rookie in the west, Charlie Enright, has the boat (11thHour Racing) and co-skipper in two-time winner, Pascal Bidégorry, to set a record for the fastest debut double-handed crossing of the Atlantic. They are among ten possible winners in the IMOCA.

Britain v France in the Class40

In the Class40, there are two British skippers among the four favourites. Luke Berry has Frenchman Tanguy Le Turquais with him on Lamotte – Module Creation and Sam Goodchild on Leyton, has Fabien Delahaye, the winner in 2013.

Their biggest rivals look like being Aïna Enfance and Avenir  (Aymeric Chappellier / Pierre Leboucher) and Credit Mutuel(Ian Lipinski / Adrien Hardy). Chappellier starts favourite after finishing second in the Route du Rhum last year and in the 2017 edition of this race, by just 17 minutes.

The Swiss boat, Banque du Léman(Simon Koster / Valentin Gautier) is the newest boat in the fleet, so new (it launched a month ago) that the skippers have only sailed 1,200 miles and neither has previous Class40 experience. But eight Class40’s have realistic hopes of victory.

Charal (Jérémie Beyou / Christopher Pratt), will be the first to cast off their mooring from the Bassin Paul Vatine at 08:15 (French time) and head out towards the start line in front of the Cap de la Hève in the Baie de la Seine (Le Havre is at the mouth the River Seine after it wound its way 125 miles north-west from Paris).

The start is rarely simple. With 12 knots of north-east breeze it may take them three hours to tack their way through a choppy shallow sea with plenty of current against them, along the 16 miles of coast to round the Region Normandie buoy off Étretat.

Conditions in the Channel are looking relatively easier and they should pass the tip of Contenin early on the first night. The wind may get up to 25-30 knots and demand several sail changes – the most physically demanding aspect for these duos who will be sweating in their oilskins. It promises to be a long first 24 hours after an early start. The IMOCA and Multi50 could exit the Channel by Monday morning with the Class40 out by the afternoon.

By then the path and effect of the unusually huge low-pressure system over the North Atlantic, stretching from the Azores to Britain, may be clearer. “Traditionally at this time of year, the depressions sweep the Atlantic, allowing the passage of the fronts west then south,” Richard Silvani of Météo France said. “This year, the big low is stationary and is forming a real block.”

Overnight from Friday the forecasts seem to be favouring the west rather than dodging east along the coast of Spain and Portugal. But the route furthest west will add 400 miles to the road to Salvador.

“This morning it looks like the west option is the best one,” Beyou said. “Now the question seems to be whether you reach the second low pressure system by east-south-east or east-north-east, but that’s in the details, it’s not easy to say right now. What looks better is that under the low pressure the tradewinds look like being a bit more consistent, or at least bit easier to get through the light wind between the low and high pressure. The picture is a bit better this morning, but that can change, we’re talking about things that can happen in five days, it’s a bit far out. We’ll decide by the first night whether we tack or not at Ushant. It will be a busy first night.”

The evolution has changed things for the Class40 too. “It has (changed overnight) but there still is a question of how far west you go? Berry said. “Do you round the depression or do you got south straight away?

“Last night the two different models were saying different things. But they both seemed to say it was best to go west, so it does mean going into wind and waves, not something that we mind, but there’s always a bit more risk in that. Now, the question is how far west do you and how far south?

“It will be the same for us (as the IMOCA, deciding on the first night), the decision is going to be around which sail you put up, if you want to be a bit closer to the wind, you want one sail, and if you want to be downwind, another. And once you’ve put that sail up…less so than with the IMOCA, but we still take quite a bit of time to change sails, so, once you’ve made your decision you’ve got to hold to it.

“Maybe there will be a big split in the fleet after Ushant,” Bidegorry said with a hint of mischievousness.

Either way the chances of a record-breaking ten-day finish for the IMOCA look to have gone and the challengers could be more densely packed.

There will be live coverage and tracking of the start on the official website: www.transatjacquesvabre.org/enand on Daily Motion. 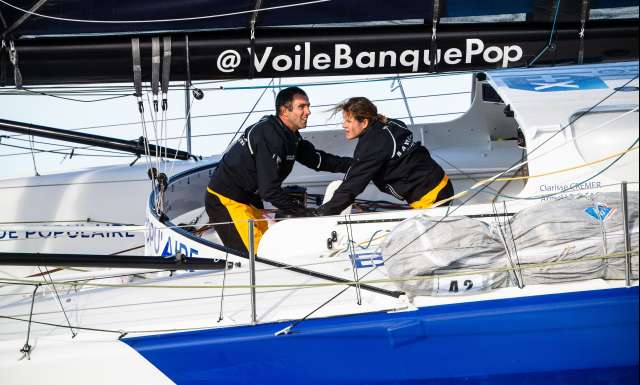