A sleepless night ahead

Phil Sharp wins Class40 start and gets his jamon 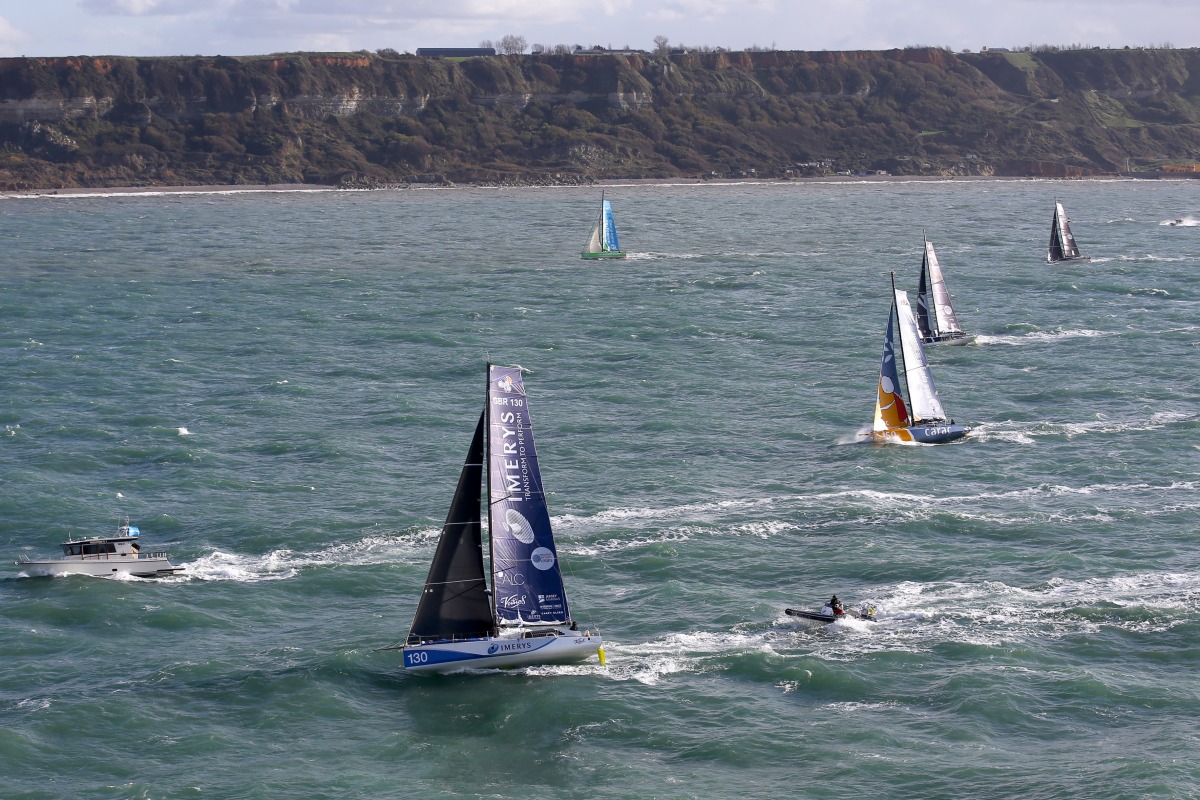 A pumped up Phil Sharp and Pablo Santurde (Imerys Clean Energy) – the Anglo-Spanish pair – were first across the line in the Class40 as the 13th edition of the Transat Jacques Vabre 2017 started at 13:35 (French time) from its home in Le Havre, in Normandy, France today (Sunday). Beautiful light but lively weather greeted the fleet of 37 boats and 74 crew.

With 15-18 knots of north-westerly winds, a choppy shallow sea and plenty of current against them, they negotiated 15 miles of coast to round the first marks at Antifer and Étretat. It will be a highly technical and tactical starting phase, with lots of sail changes and no sleep tonight.

The Ultime should be passing Ushant around midnight, followed by the Multi 50 in the middle of the night. The Imoca and Class40 are likely to suffer most in a softening wind against the strong currents at the tip of Cotentin, and the gaps with the multihulls will already start to widen.

It may be a marathon not a sprint, but Sharp, the leader of the Class40 championship, was raring to go as the boats had their tremendous send-off from the pontoon. “(I’m feeling) anticipation and hunger to get out there,” the 36-year-old Sharp said. “I feel the pressure of it (being one of the favourites). I’m hoping for 17 days, I’m aiming high.”

All four classes are looking at record times for this bi-annual double-handed transatlantic “Route du Café” race of 4,350 miles to Salvador de Bahia, in Brazil.

With every kilo counting, Britain’s Sam Davies said they had taken two days of food off Initiatives-Cœur. Some benefitted from this: “We got our ham,” were virtually Sharp’s final words as he pushed off. “Alex Pella (the Spanish sailor on the Multi 50 Arkema) had an excess of jamon so he gave us some. We decided we would take the same amount of food but just eat more every day, the worst thing you can do is run out of food.”

That international camaraderie of the fleet was extended by Davies, who wished good luck to the many offshore racers and record breakers in the Atlantic this weekend, which includes a larger number of former Transat Jacques Vabre competitors.

“First to all the fleet in the Transat Jacques Vabre good luck and I hope to see you all in Salvador,” Davies said. “But we’re not the only ones out in the Atlantic: to the Dongfeng race team on the Volvo Ocean race you too are about to set off on a massive leg to Cape Town, thanks for your encouragement, and the same back to you, to Charles (Caudrelier), a winner of the of the Transat Jacques Vabre in 2009), Carolijn (Brouwer) and yes Carolijn, Foxy is going to be onboard Initiatives-Cœur don’t worry! Good luck to the whole fleet and especially all the girls from Team SCA.

“A massive good luck and bon vent to Yves Le Blevec (a winner of the Transat Jacques Vabre in 2011) on Actual Ultim, a boat that I know well, from having done the Bridge with you this year. And François Gabart (a winner of the Transat Jacques Vabre in 2015), who is also setting off on Macif on a record this weekend - sail safe and sail fast. And we mustn’t forget the mini-Transat because you guys have been out there for one week already. What a great weekend for sailing.”

First across the start line

“It promises to be a fast crossing, but ETAs are not our priority. We’ll encounter conditions we’ve never had with this boat. Our goal is to get to Bahia, as best we can, and especially lay low for the first two days. You feel the stress of the start as soon as you are passing through the lock; there’s only one metre on each side of the boat, you have to be really focused and you have a knot in your stomach. So, the whole team will do everything to try to avoid all the hazards.”

“We’ve had a fantastic week in Le Havre, sunny days and the now we have dark skies, perfect for the start. We’re looking at 12 days (to finish) maybe, it looks like being a fast race. We had 14 days of food and we’re leaving 2 days of it on the dock. The first two days could be intense. First thing, there’s the emotions, the stress, we’re sailing close to the other boats, lot of traffic on the Channel, we have a lot of current against us in the beginning, it’s windy, everything, no? Then we need to cross an area with no wind after the point of Brittany and after that the front. But that’s what we came for (laughing).”

“Three victories in the Transat Jacques Vabre changes nothing, we always have this little knot in our stomachs that grows when we leave the pontoon and disappears little by little when we sail, because that's what we know how to do. Everything is good, but a grain of sand can stall a machine. You have to stay focused and then think about sleeping, and resting before the front. This is the key to thinking clearly and staying alert.”

“The second night is going to be very windy, the front is going to be brutal and so are the waves. We’re going to be going straight into some really nasty swell and then after we tack we’ve just got a monumental amount of wind that is going to come down from the north. We really need to anticipate when we get that change and be ready for it.” 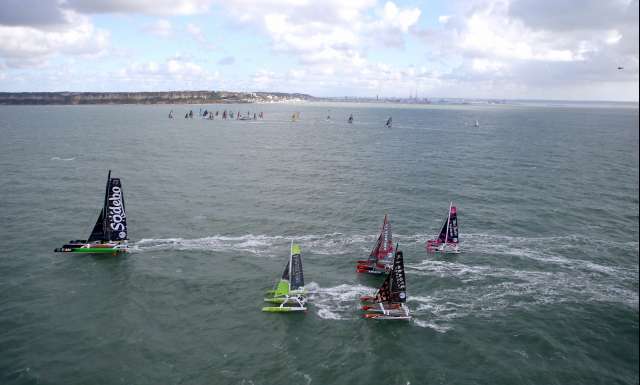 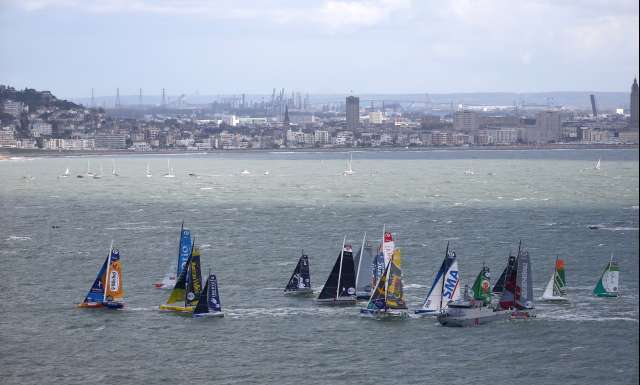 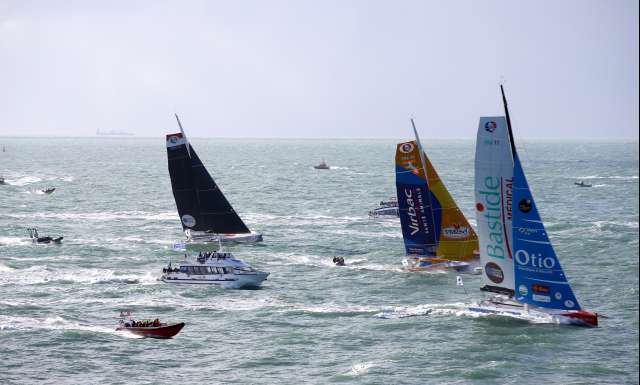 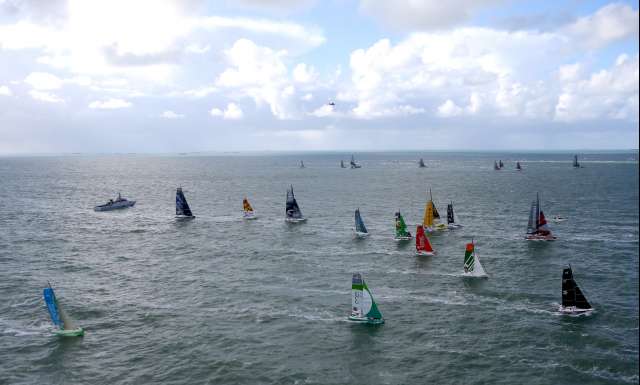 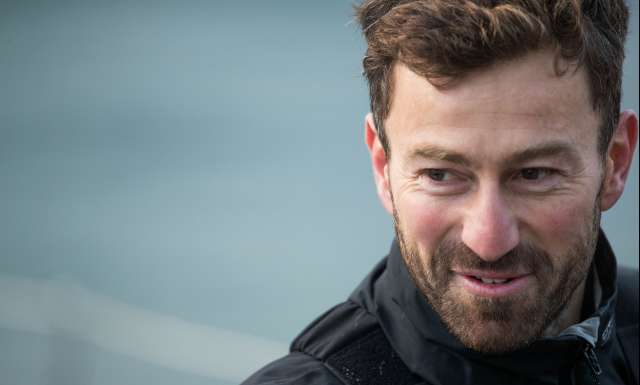 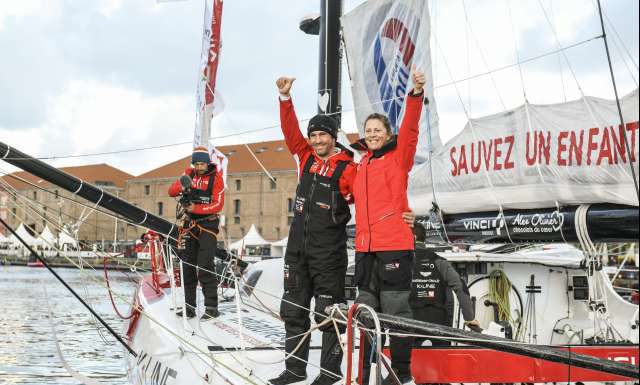