Sam Goodchild and Fabien Delahaye, on their 40ft monohull, Leyton, have finished second in the Class40 of the 14th edition of the Transat Jacques Vabre Normandie Le Havre after crossing the finish line in the Bay of All Saints in Salvador de Bahia, Brazil on Thursday, November 14, 2019 at 12:58:11 (UTC), 18 days, 0 hours 43 minutes and 11 seconds after leaving Le Havre, Normandy, France on Sunday, October 27 at 12:15 (UTC).

Read the story of their race here

“It’s a release finally,” Goodchild said on the pontoon by the Terminal Turistico Nautico da Bahia in Salvador.“The last two days have been pretty stressful and before that I think we had two half dry days on deck and apart from that we had waves on deck the whole time. Second place is now secure - we’re pretty happy about that.

“The Crédit Mutuel guys sailed an awesome race. They sailed in the right way, fast and never gave us opportunity to come back to them after they got their advantage.”

“We don’t have many regrets; there’s always places where you gain, but there was nowhere where we made huge mistakes and could say, ‘Ah! Next time we wouldn’t do that,’ Goodchild said.

Most significantly Goodchild and Delahaye’s entente cordiale beat Leyton’s Manuard mach 3 sistership, Aïna Enfance & Avenir, which was a close runner-up in the 2017 edition and is due in this afternoon.

“We’re pretty satisfied with ourselves with how we sailed against Aïna,” Goodchild said. “I mean, Aymeric (Chappellier) knows that boat like the back of his hand and he’s been sailing it for three years. We’ve got a few miles under our belts, but nothing like... We had a bit more trouble choosing sails than Aymeric but every time we lined up we had good speed.” 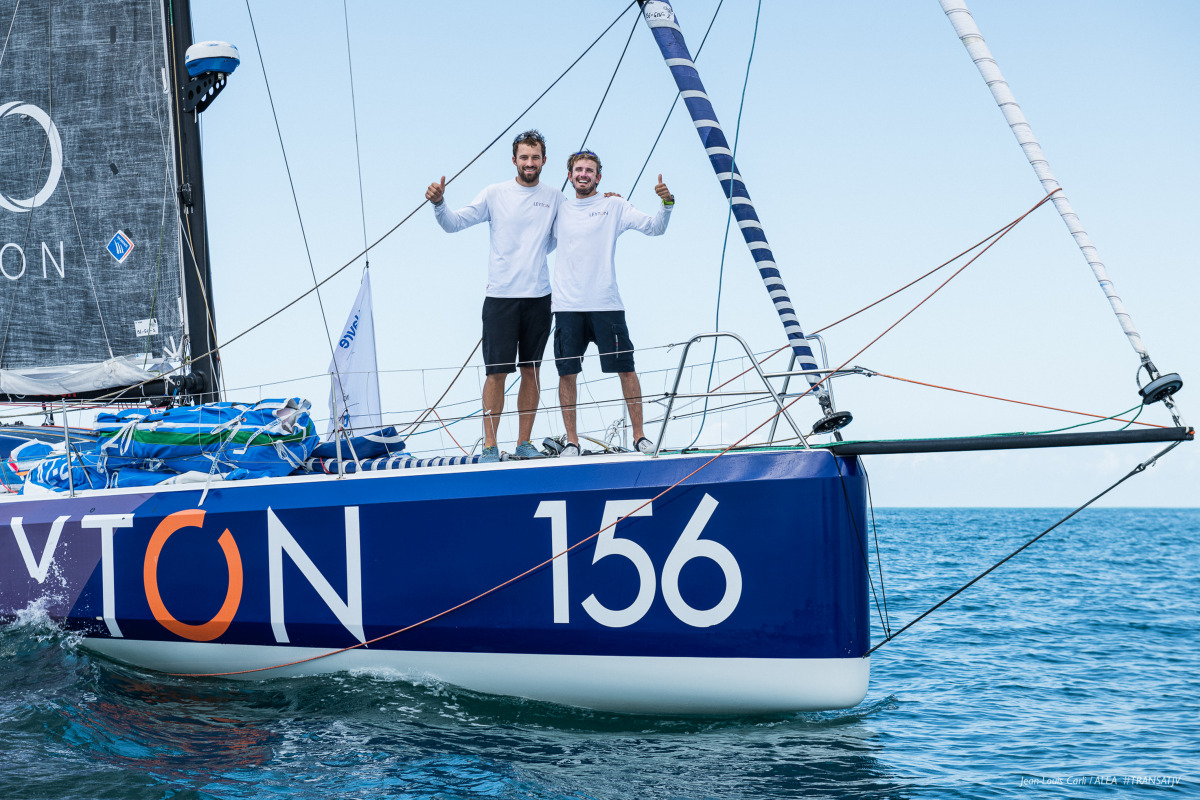 The whole fleet will have noted the comeback of the Swiss duo on Banque du Léman, which has moved into third, albeit by only 0.44 miles at the 15:00 UTC ranking. The new Manuard mach 4, which has only been in the water for three weeks before the start, has made up 23 miles on Crosscall Chamonix Mont-Blanc in the last 24 hours

ETAs (Warning! The approach to the finish in the Bay of All Saints still looks complicated, so time may vary.)

There have already been plenty of nail-biting finishes in the IMOCAs with duos match racing down the coast of north-east Brazil, but perhaps nothing to rival what is coming in the battle between two of the most oldest generation boats in the fleet.

At the 15:00 UTC ranking, Britain’s Pip Hare Ocean Racing led the Franco-Irish duo on 4myplanet by just 0.72 miles after nearly 5,000 miles of ocean from Le Havre. If it was “jolly tense” as Pip Hare said on Wednesday, it must be “more tea, vicar” now. They will be able to hand their rivals a cup soon. Pip Hare and Ysbrand Endt, on Pip Hare Ocean Racing, are just a mile to the west of the only all-women duo in the race, Alexia Barrier and Joan Mulloy on 4myplanet, and they are converging.

It promises to be a breathless finish in more ways than one, with an unstable breeze dropping all the time. There is still work to do before they pass the black and white Barra lighthouse into the turquoise waters of the Bay of All Saints, as smooth as a pond of the, under an endless sun.

ETAs (Warning! The approach to the finish in the Bay of All Saints still looks complicated, so time may vary.)