Pip Hare and Ysbrand Endt, on their 60ft monohull, Pip Hare Ocean Racing, have finished twenty-fourth in the IMOCA class of the 14th edition of the Transat Jacques Vabre Normandie Le Havre after crossing the finish line in the Bay of All Saints in Salvador de Bahia, Brazil on Thursday November 14, 2019 at 17:26:43 (UTC), 18 days, 5 hours 11 minutes and 43 seconds after leaving Le Havre, Normandy, France on Sunday, October 27 at 12:15 (UTC).

Lesser mortals might have quailed in the face of the obstacles confronting Pip Hare before the start. Already with a tiny budget, she was all alone three weeks before the start of the race after he co-skipper, Andrew Baker, broke his arm kitesurfing. “It was a really bad accident and he got a really bad gash on his head,” Hare said on the pontoons in Le Havre, waiting for her friend and Dutch skipper, Ysbrand Endt to arrive.

Endt, his wife Christa and Hare had stayed friend after all doing the 2011 Mini Transat together. They had sailed together before and Endt has a huge number of racing miles under belt, short-handed and crewed, on everything from Minis to Volvo 70s. They even managed a 48-hour sail before the start, but as Endt said with a smile and masterly understatement on the seventh day of the race, “it was marginal preparation.”

They would form one of the happiest teams underlined by their joyous arrival. If starting was a triumph, finishing felt like victory. Especially as they managed to beat Alexia Barrier and Joan Mulloy on 4myplanet, who finished 10 minutes and 22 seconds behind.After three days of match racing down the north-east coast of Brazil, they were less than a mile apart on the leaderboard most of the time Thursday and sometimes as close as 200m away on the sea. “I was exchanging emails with Joan, and she said: ‘nice to see you but not that nice.”

From Le Havre, Pip Hare Ocean Racing was always part of a group of five boats  with Campagne de France, 4myplanet, Ariel II and Vers un monde sans SIDA. Approaching and then threading the Canary Islands, Hare had lost ground and was 28thand last on the eighth day of racing. As they approached the Cape Verde archipelago on the 10thday, she was struggling to hold on and was 120 miles behind 4myplanet with only Ariel II and their delaminated mainsail behind them.

But Hare loves the downwind and in the north-east trade winds they roared back, passing 4myplanet as the entered the Doldrums on the thirteenth day of the race. That was the beginning of six days of head-to-head racing that got ever keener as reached to Recife exchanging the lead over each other at every ranking. “It’s jolly tense out here,” Harris said on the penultimate day on Wednesday, “and this wind angle and strength is our absolute Achilles heel because we’ve only got a tiny gennaker for reaching. We are squeezing every tiny bit of speed out of this poor boat. We’re having an epic race with Alexia.

It’s really nice to have this kind of intensity.” And they kept it up all the way to the line. 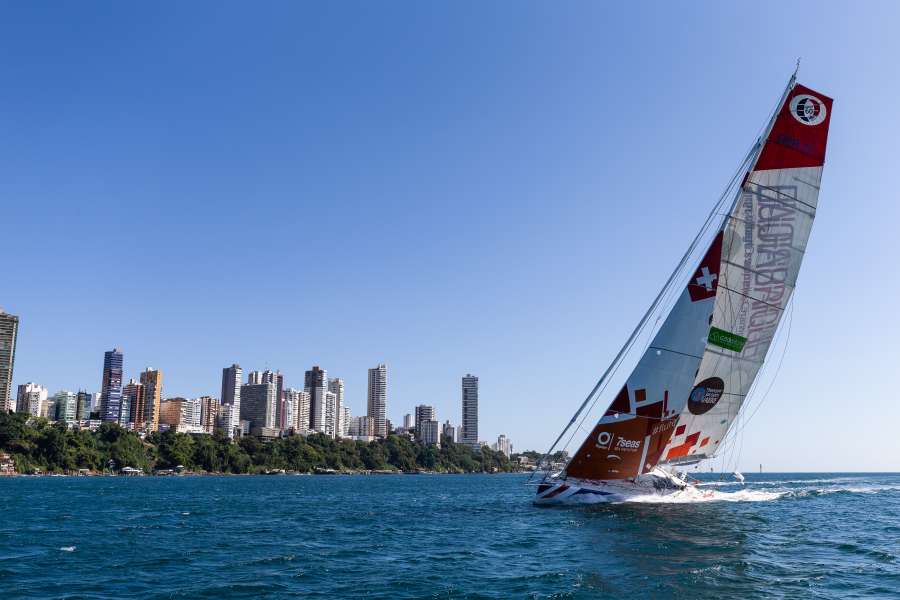