Ari Huusela: It’s amazing, couldn’t believe it (that they had arrived in Salvador). It feels great to be the first ever Scandinavian IMOCA sailor to finish the Transat Jacques Vabre, I’m proud of that. Hopefully someone else from Scandinavia can follow in my footsteps now I’ve shown that it’s possible, even if we’re a bit faraway. The Baltic Sea is good training for this.

Michael Ferguson: If you’d have told us two and a half weeks ago we’d be here, I’d have laughed, but here we are. We were lucky to have been able to have a fire (on the solar panels) two days ago, because it spiced things up a little bit.

I’m sure you’ve some of the footage of the mainsail and it’s one of those things that you have to see it to believe it. When we dropped it just now it was unbelievable.

The hardest thing has been dealing with the light winds. The windy stuff has been fine. The Doldrums was hard. We were able to keep up with Pip (Pip Hare Ocean Racing) and Alexia (Barrier, 4myplanet) for a lot of it, when it was windy, but as soon as it went light the wind just blows staight through the sails instead of helping. Two days ago we had to wave goodbye and let them race on.

Ari: Then we had our own race with the sans SIDA guys - that was nice.

Michael: They’re just finishing too. We had a 35-mile lead on them two days ago and it went down to nine overnight and I just thought, ‘oh, here we go again.’

Ari: This morning it was down to three miles.

Michael: We had a gybing duel. A lot of things kept us interested, because after the disaster of two days in (to the race), it turned out to be a semi delivery trip for us and having a few boats to race with has kept our spirits high.

Ari: No, no, my friend Tapio (Lehtinen), who raced in the Golden Globe race,he did it with three layers of barnacles on the bottom of his boat, 332 days. I thought, even if it takes 50 days, I’m going to do it.

Michael: I wasn’t as keen.

Ari: I thought, I have to do it and of course I needed the miles. It was a good race for me, I’ve learned a lot about the boat. Actually, many things got better on the boat during the race.

Michael: We’ve tweaked the autopilot because some conditions it just didn’t like and we’ve made a lot of adjustments and learned a lot about how to use the instruments better. So, we’ve had time to do other things than just purely try to get here.

Ari: We found out there are some bad connenctions in the solar panels!

Michael: We also said goodbye to another sail yesterday, we had a nice 3DL Code 0, which on the last day of the doldrums started doing what the mainsail did. And yesterday we had to change to the A3, because there was a bigger hole in the Code 0 than there was in the mainsail. So, we’ve got a couple of sails for the trash.

The mainsail (went on the first night) when we put a reef in off Guernsey and that’s when the first hole went in, we noticed it,  it was a about the size of your fist. By the time we’d got to Ushant it was the size of a football.

Michael: The funny thing was that (the Bay of) Biscay wasn’t even that bad, it was benign.

Ari: Yes, the easisest for me of all five times I’ve done it.

Michael: But the mainsail couldn’t take it, simple as that. And once we got to Finisterre we kept the two reefs in. Reef 2 believe it or not was actually just trying to rip out of the sail totally, there was just strings above it. We decided to leave reef two in for three days until we had the wind aft of the beam. Then we took a risk/gamble that we’d try to hoist it and see what it  looked like, and under reef 2 was amazing.

Once we saw that up it was a case of, ‘how far can we get here?’ We said we’ll make a call at Madeira, that’s ok; La Palma, and then at that point I wasn’t going to turn around and go back upwind, so we were off. 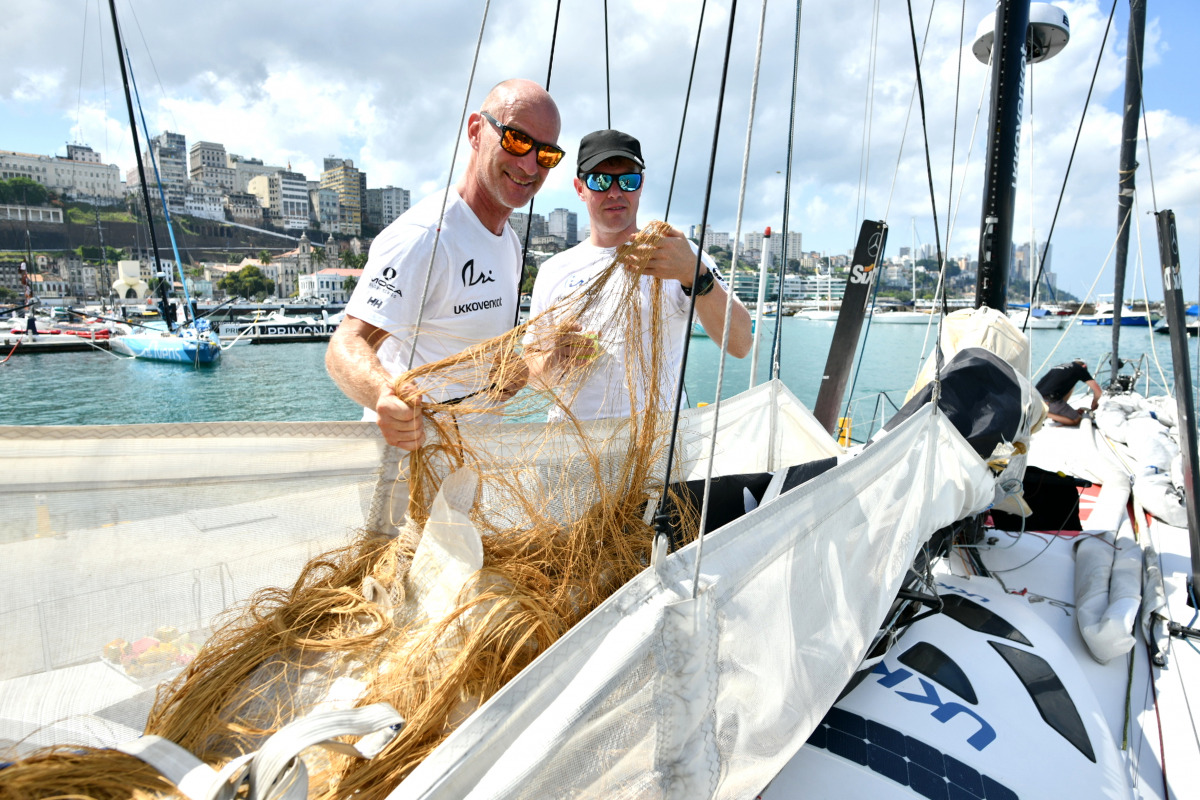