Less than 300 Miles from the finish of my first Class40 race on board Crédit Mutuel, here is a little update. Of course, the uncertainty of sport in general, and ocean racing in particular, necessitates caution as to the final result. However, to be in the lead at this stage of the race and 60 miles ahead already fills me with satisfaction.

After winning the Mini-Transat two years ago, nothing was played for me to continue the race. It was during the winter of 2018 that a chance meeting enabled me to meet the management of Crédit Mutuel and in a few months to confirm this project and build a new, innovative Class40. We had to move fast because it was a tight schedule. David Raison, the architect, “killed” himself working to design his first Class40 in time. The goal for him was to repeat the stroke of genius he had in designing the first scows on the Mini 6.50 circuit.
Having had the chance to sail on such boats, I understood the incredible benefits they provide: speed, comfort, ease of use - especially offshore in big seas and the strong wind.

February 2019, start of construction of the boat at JPS, whose reputation is second to none.

Throughout the summer we helped the boatyard team as much as we could
to speed things up and get the boat in the water by mid-August. With Pic, Pauline, Camille, Gerome, Fidel and Albane, we worked night and day and 7 days a week, using all of our physical and mental reserves!

The reward was launching in La Trinité on August 13, with one question in our heads: would this funny-looking boat work?

There was no time to wonder for too long, we had to push on: we had our times in the water, while David still needed to install all the electronics. That wasn’t easy for him when the boat was sailing, he was also working all night every night! Adrien Hardy has also then arrived to strengthen the team and help us learn about the boat.

So Pic, Adrien and I, combined our experience and expertise to try and prepare this boat to cross the Atlantic in record time. Nobody can count the hours we spent getting there - the investment was total. We broke as many things as possible: the boom, the rudder system…

After first training sails, we realised that the boat was not a dud. We could see that there was potential, but
it did not set our world on fire either. It was not going to be easy; the start of qualifying, some DIY, other training  - then it was already time to go to Le Havre!

We arrived at the start with the boat ready, and the days that followed would demonstrate the quality of the work done. We haven’t got the toolbox out for the whole crossing!

As we hoped, the boat becomes magical in more than 25 knots of wind. She flies on the water and rides the waves without slowing down.

Madintec's autopilot, the "Madbrain" has also behaved
perfectly. After coming out of the Channel, we never touched the helm again, and beat the 24-hour record under autopilot! The “Third
Man” was clearly a key factor in this performance.

Whatever happens from here to the arrival in Salvador, I'm very happy with the little bit of path we’ve already trodden and remembered here. It’s a great opportunity to lead these projects. I give my infinite
thanks to Crédit Mutuel, who have put great trust in me. Many thanks too to Pic and Pauline who gave everything they had before the start, to David who will to be able to go on a refreshing cruise, and Adrien for having supported me over these last 17 days!

How good it is to sail on these beautiful boats, under the warm night skies in the trade winds. I’m going back on deck to enjoy the last few
hours ... 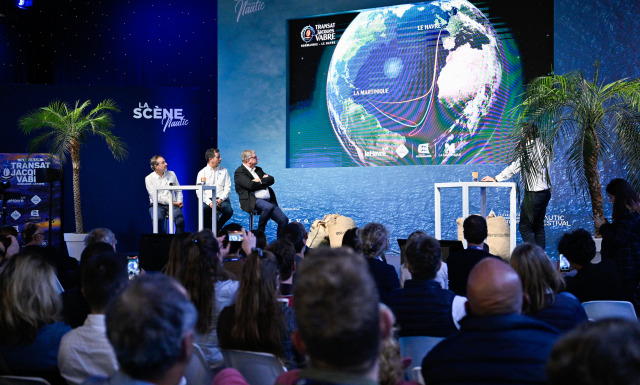